We had stopped for the night in De Forest, Wisconsin and grabbed a tent site at the KOA.  We were both pretty bushed, so we did little more than set up Cahlean’s tent, grab an extra blanket for my “bed” in the front seat and gab a bit before hitting the hay.

We were both up at dawn, a little numb from the cold, but well-rested and loving our morning view… 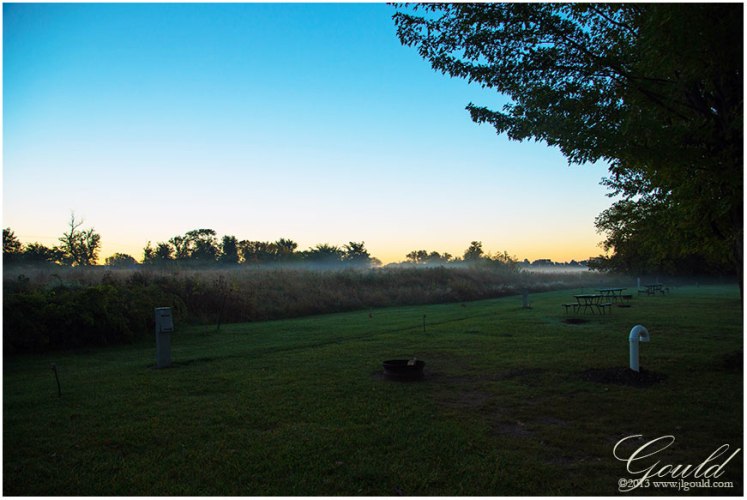 De Forest is a really small town, but we’d spotted a few things that made us want to go take a closer look.  This included:

Yeah…that’s a life size pink hipster elephant.  At the gas station.  I bought the t-shirt. 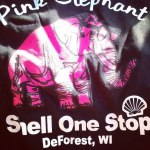 I wasn’t moving much that morning, but Cahlean photographed quite a bit of the character of that town.  She plans on blogging about it at About A Dog soon and when she does, I’ll give you all a heads up!

Our next task, because we are both creatures with caffeine addictions, was to find a cafe.  I’m a BIG fan of finding independent coffee shops in my travels and my GPS has the lovely feature of letting me search for Coffee on my planned route.  We found our stop just a few miles down the highway, in Madison, Wisconsin.

Cool Beans Coffee Cafe had some of the best coffee I’ve EVER had.  Their oatmeal was pretty amazing as well.

After that, we drove on for a few hours.  Fueled with sleep and excellent coffee, we covered miles, chatting the entire way.  I happened to look at the gas gauge and noticed that the gas light was on.  I asked Cahlean how long it had been on, and that’s when I discovered that her car makes a sound to alert you when the gas light comes on and that there was just no way of knowing how long it had been on.  Well, save for how many miles we’d gone since the last fill-up, which was some 40 miles past when I’d ever filled up.  Oops.

We took the next exit that said it had a gas station and that’s how we ended up in the adorable small town of PawPaw, Illinois.  After gassing up, we took the opportunity to explore for a little bit.  Its the tiniest of villages, covering just .59 square miles and home to less than 900 people.  PawPaw was full of signs of repurpose, regrowth and community.

From small town, we went to the big town…Indianapolis.  I don’t know WHAT Indianapolis was thinking, and maybe the highway department just thought it would be funny to mess with people, but going round a beltway, halfway round the city, then looping back in the opposite direction a quarter turn, then hitting a zillion detours just to get back on the highway…well, it just doesn’t seem like the most efficient way of doing things!

Despite our wanderings, we made it all the way to Springfield, Ohio that evening.  I used my phone to google for a campground on our route, chose the most convenient looking one and fed it into the GPS.  It ended up being a little ways off the highway, but we didn’t mind- more exploring for us!

Buck Creek State Park was MUCH larger than we anticipated and it was beautiful!  Beaches, trails, docks, forests, campgrounds, playgrounds…it had everything.

So there ended our second day of driving.  The surreal happenings would occur the very next day. 😉